This search form uses an instant search feature. As you type, search results will appear automatically below the search field. When you've entered you desired search terms use tab to navigate through the available results and hit enter to open the selected page or document.
EDIT LEFT 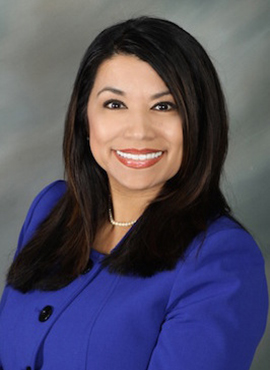 Esther Lemus was first appointed to the Windsor School Board in February 2015. She was re-elected to her seat in November 2016 while earning 64.6% of the vote. Esther is a firm believer in the potential and promise of every child and is committed to maximizing the educational opportunities and future success of all children in Windsor schools. As a first generation college and law school graduate, Esther recognizes that a quality education can serve to transform the lives of students and their families. Therefore, she is strongly committed to enhancing the quality of education in Windsor schools so that all students can make their dreams a reality.

Esther is currently employed by the Sonoma County District Attorney’s Office which she joined in 2007 after having previously served as a federal prosecutor for the United States Attorney’s Office in the U.S. Department of Justice. Esther has extensive experience working with Truancy Court and the enforcement of the compulsory education laws. She is also a past member of the Sonoma County School Attendance Review Board (SARB). During her tenure in Truancy Court, Esther worked in partnership with the Sonoma County Office of Education (SCOE) where she served as presenter and trainer to school officials regarding truancy laws and the referral process for prosecution. Esther currently serves as coordinator for several community safety initiatives related to youth, including the Gun-Violence Information for Teens (GIFT) program, the Gang Resistance Education and Training (G.R.E.A.T.) program, and #iSMART (Internet, Social Media Awareness, Resources &amp; Training) which she teaches to students throughout Sonoma County. Esther is also assigned to handle criminal cases in Domestic Violence and Mental Health treatment courts.

Esther was born and raised in Santa Rosa and moved to Windsor when she was in high school. She received a Bachelor of Arts degree from the University of California, Berkeley, and a Juris Doctor degree from UCLA School of Law. She and her husband, Doug, reside in Windsor with their two young daughters, Sydney and Chloe, who are students in the district.